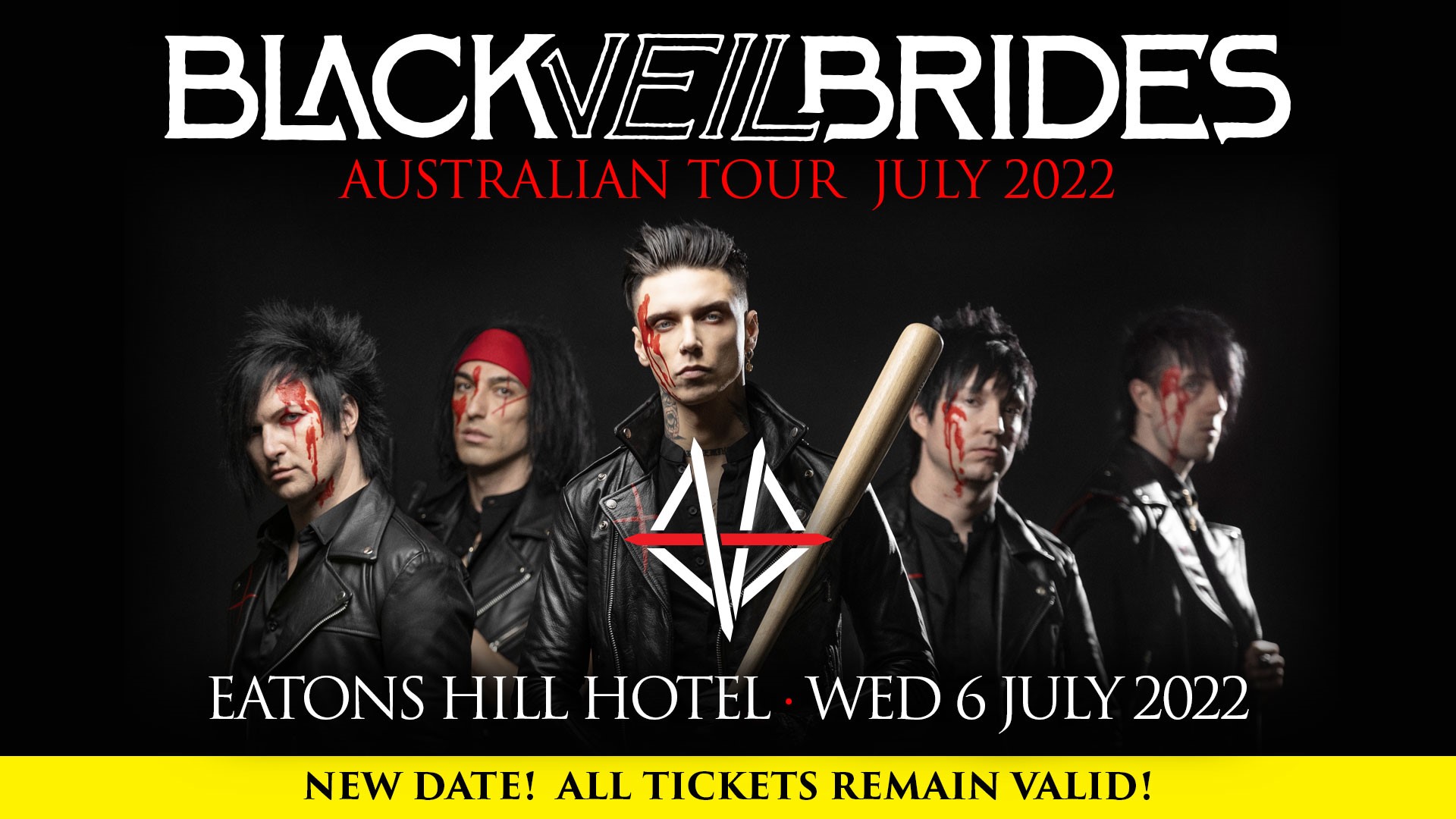 Destroy All Lines are thrilled to announce the return of BLACK VEIL BRIDES for their Australian headline tour which sees them performing in Brisbane, Sydney, Melbourne and Adelaide in July. Their long-awaited return is the band’s first Australian shows in 6 years.

BLACK VEIL BRIDES have championed the isolated, the dismissed, and the forgotten since the band’s early inception. That ethos and spirit persists in the fully realized incarnation of the band whose image is the object of devotion and obsession, and whose anthems are sung in unison by an international audience, a diverse legion who refuse to surrender.

In an era when rock music is regularly declared “dead,” BLACK VEIL BRIDES music videos have been viewed over a half a billion times. The band (and its members including vocalist, Andy Biersack, who was named as one of the 100 Greatest Living Rock Stars by Revolver) Instagram and Twitter accounts command close to 10 million followers between them.

In late November 2019, BLACK VEIL BRIDES released two brand new songs, The Vengeance + Saints Of The Blood = The Night, on the band’s brand new label, Sumerian Records. “They came, they went, they’re back again–Black Veil Brides exude far more heavy metal tones than they ever did before, and we like it.” said Hysteria Magazine.

BLACK VEIL BRIDES have an impressive stack of awards and accolades under their belt with multiple Kerrang! Awards, Revolver Golden Gods Awards and Alternative Press Music Awards. Vale, the group’s most recent full-length album, went to No. 1 on the US Billboard Top Hard Rock Albums chart.

The band’s tour history reads like a textbook of subcultural mile markers in the modern heavy music scene. An initial hardscrabble headlining outing in 2009 has been followed by multiple mainstage runs on the Vans Warped Tour; tours with Slash, Motley Crue, Avenged Sevenfold, Bullet For My Valentine; the massive Resurrection Tour, co-headlined by new labelmates Asking Alexandria; multiple US festivals, including Rock on the Range and Aftershock; and several appearances at the UK’s acclaimed Download Festival.

With a rightful reverence for the pop cultural icons of the past, the young outfit has nevertheless fashioned their own collective future, with relentless fury. In the hearts and minds of their fans, Black Veil Brides represents an unwillingness to compromise and a resistance to critics (personal and professional), fueled by the same fire as the group’s own heroes, the iconoclasts whose creative output, once dismissed, is now canonized.

Be sure to pick up your ticket for one of the hottest tours of the year HERE.

Due to a positive COVID case within the Black Veil Brides camp, the Brisbane show scheduled for this Thursday 5th May 2022 has been rescheduled and will now take place on Wednesday 6th July 2022. All existing tickets remain valid with no action required. If you can’t make the new date, refunds will be available until Wednesday 18th May 5pm. Ticket holders will receive an email from their ticketing provider with further information and instructions.

A message from Black Veil Brides:
Brisbane, we’re so disappointed that we have to reschedule the show. Our bags were packed and we were ready to go. The good news is, we will be back and can’t wait to play for you. We appreciate your support and patience. Love BVB